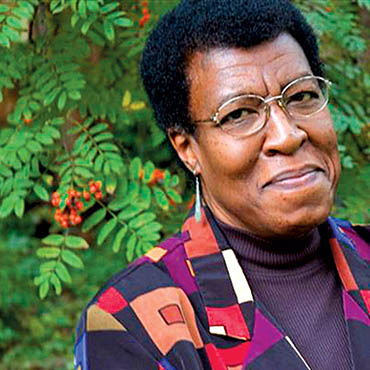 Octavia E. Butler, a prolific African-American science fiction author,  was born in Pasadena, California on June 22, 1947. Butler a shy & awkward child, was raised by her widowed mother. She spent found an outlet at the library reading fantasy, and in writing. She began writing science fiction as a teenager and eventually attended Pasadena Community College, California State University Los Angeles and the University of California at Los Angeles. In 1970, she attended the Clarion Science Fiction Writers Workshop, which changed the course of her life. “Crossover”, Octavia Butler’s first published story was published in the Clarion Anthology in 1971. 5 years later, she published the first novel in the Patternmaster series.

In 1979, Butler published Kindred, the story of a Black women married to a White man who travels back to a time when Blacks were enslaved. Drawing inspiration from her mother’s life as a main, Butler once said. “If my mother hadn't put up with all those humiliations, I wouldn't have eaten very well or lived very comfortably. So I wanted to write a novel that would make others feel the history: the pain and fear that black people have had to live through in order to endure.” After publishing Kindred, Butler was able to support herself and take care of her mother through her writing.

Octavia Butler died at age 58, after a fall at her home in Seattle, Washington. If you have not had the pleasure of reading Octavia Butler, visit your local library or bookstore and inquire.